This weekend my best friend came for an incredibly long overdue visit and, because she can hear me thinking a post from 1700 miles away she brought me an article from Bitch Magazine.  (Did I mention how much I love that girl?)

I like to say that Taylor Swift is one of my biggest guilty pleasures.  Some people smoke, I cry at the end of Love Story.  Don’t’ judge me.

But I’ve always been a bit perturbed at the presence of such Madonna-whore/good-girls-wear-white-and-bad-girls-have-sex imagery in her music and videos.  She’s said in the media that she really enjoys being a role model for girls and I’ve been wondering exactly what kind of role model she is.

Mormon mothers all across America are beyond thankful that she hasn’t gone the Lindsay Lohan route and to be honest so am I.  But they’re also thankful she hasn’t followed Miley Cyrus, Christina Aguilera, and whatever other girl pop icons (get ready for it) had sex.

The Bitch article made me ask a lot of questions about Taylor.  And in asking those questions I had to separate Taylor, the girl, from Swift, the brand.

Swift’s image generally screams VIRGINITY!  YOUR DAUGHTERS WILL HAVE A REALLY HARD TIME GIVING A BLOW JOB WHILE LISTENING TO MY MUSIC.  Exactly what is the ratio of white/non-white clothing in her closet.  I’d say only Elle Fanning tops her.  And her brand is consistently bashing the girl in the trashy dress who ‘gives it all away.’  Remember this?

So we can safely say that Swifty, the brand, is caught up in telling young girls to keep their most precious asset safe.

And so I remember very clearly from when she was dating GROWN A$$ MEN like John Mayer and that Gyllenhall hottie wondering exactly how adult her relationship with them could be.  I remember Gyllenhall buying her big gifts and thinking how curious that was.  A fancy guitar in exchange for her most precious of all things?

Then this article pointed out exactly what the issue is.  Swift the brand is about as virginal as it gets and the people who manage the brand have been very careful to keep it that way no matter what the truth may be.

Which leads to my next question.  In the article it points out that in one of her latest songs Mine she alludes to ‘a drawer of my things at your place.’  Finally acknowledging that like most girls my age (because dear Taytay is only 16 days older than me), she might have discovered sex… and possibly even liked it.  Never mind that whether that is or isn’t true isn’t ANYONE’S business.  But, I digress.

When that song came out she got slack from southern radio stations who said they had trouble seeing her as ‘the girl next door’ because of that lyric.  Let me tell you something about the girl next door.  If she’s older than 16 she’s probably having sex (with herself if no one else) and just not telling you about it.

So after all that my question is this. Who is to blame here?  Yes, I think Taylor is hurting young girls with her ‘my untouched snatch has magical powers’ image but I also think we’re not giving her much of a choice.  America demands a steady supply of ‘good girl’ music to spoon feed our youth and will penalize her for any deviation just like it’ll penalize the girls who listen to said deviant music.  My big hope is that she can use her power and influence and one day on David Leno have a total Russel Edgington moment.

Except that instead of saying ‘I’m a vampire’ she’d say ‘I have a vagina and It feels good when I touch it and I’m not going to hell for it.’  And instead of ‘we will eat you’ she’d say ‘hey there fans, lock your doors and try it out.’  And instead of ripping someone’s spine out she could just say ‘lets talk about a little thing called the Madonna/whore dichotomy.’

It would be so easy and so awesome.

I finally made myself sit through the whole video (and song for the first time) for Beyonce’s new song Run The World (Girls) today.

First off go ahead and watch it.  If you dare.  I don’t suggest watching it lying down.  You may fall asleep.  Or sneeze.

How is she not bored of herself yet?  Every song she’s ever made is ‘I’m a powerful capital-B Bitch!’  Add in a beat you can jump around to and some barely there costumes and; Tada!  You too can be Sasha Fierce!

This song in my opinion is especially heinous.  First of all there’s the part where it’s actually a terrible song.  It’s so boring that if I were dancing to it in a club I’d use it as an excuse to pee.

Then of course there’s the part where she completely co-opts feminism.  And I think gives feminism a bad name.  Here’s a fabulous youtube video that explains this perfectly.  Plus, it’s really funny.

Update: These guys don’t care at all about the feminism.  They’re just huge Beyonce fans talking about the song as a song.  Which is also interesting and really hysterical.

Gilda is such a badass. You probably think this is pretty tame but I think it’s pretty awesome.  It makes me want to duplicate it moment by moment for a very lucky audience.  With that hair, those gloves, that sweetheart neckline.

Gilda is a pretty awesome character.  She marries rich and tortures her ex by acting all promiscuous when he’s left in charge of her safety (yeah, I know, her moral compass doesn’t always point north but you gotta love her anyway).

And as much as you might think she seems pretty tame she’s got a mighty mean streak. And it makes me wonder, if good girls do bad things and bad girls do good things then what’s really the difference between good girls and bad girls?

I would love to be Gilda for a spell.  To display that level of appeal and know it.  To turn the head of every man in the joint simultaneously. Even my most ‘good girl’ friends can get that look in their eyes like they’re having a very bad idea.  And what useless kind of a guy wouldn’t appreciate that anyway? 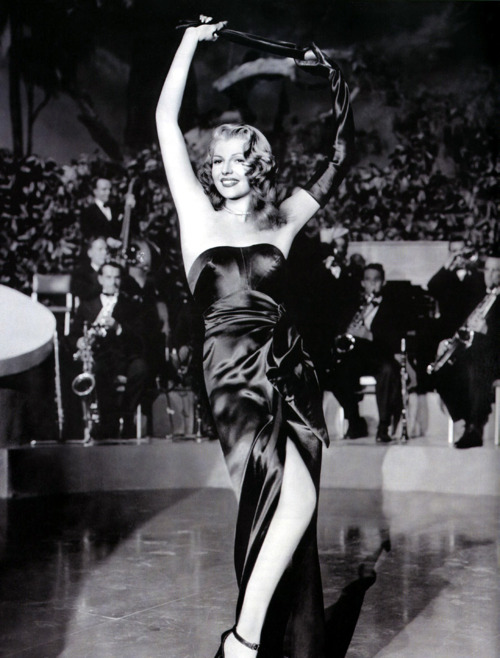 Get on with your bad self!

Today I caught up on four episodes of Glee that I’ve been too busy to watch for the last month.

So many things jumped out at me.  For example:

Thank you main stream television for showing a young gay man stand up for himself and not get beaten to a bloody pulp.

Thank you main stream television for showing young women discussing sex (points off for showing half as prudes and half as sluts with no room in between.  Need I remind you of the Whore/Madonna dichotomy?).

Thank you main stream media for showing the consequences of bullying gay youth.

Now this show certainly has enough flaws.  The plots tend to be contrived and the whole thing sounds like an after school special most of the time.

This doesn’t bother me though.  I’m willing to watch a show that is a little preachy if it means that young people all over the world are seeing examples of teens that are this accepting and open.

An after school special that people like and tune into each week.  One that preaches equality and inclusion.  Plus, people sing show tunes!

I can’t have a problem with that.  Not even a little.  It’s not perfect, but neither are you.  At least we know Glee has good intentions.

So recently I found the new Suit Supply ad campaign.  Go take a look at it.  It’s not quite safe for work but I’m probably going to put some of the images on here anyway so if that’s a problem for you then email this page to yourself now and look at it later in the safety of your own home.

I’ve found a few sides to this issue though I’m sure there are plenty more.

I pose to you a question.  Does this turn you on?

Just think about it personally for a second and don’t judge yourself.

If you’re a man and this turns you on are you ashamed of it?

If you’re a man and this doesn’t turn you on then does it make you feel ashamed?  For looking at it?  For being such a sadistic asshole man?

If you’re a woman and this turns you on then are you ashamed of it?

If you’re a woman and this doesn’t turn you on then does it make you feel ashamed?  Or embarrassed or offended or grossed out?

The arguments I’ve heard:  Jezebel says this ad campaign is shameless (as it’s titled) and should make you want to close your legs forever.  It’s telling men that if they wear expensive suits women will drop naked at their feet.

Sociological Images says that the biggest issue in this campaign is the power the men gain from showing their disinterest in the women who throw themselves at the pinstripe wearers.  This idea is something I’ve tried to touch on before. 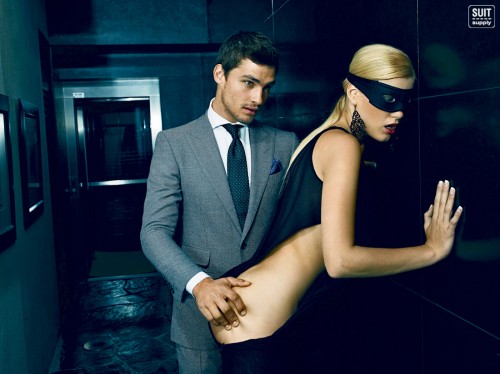 If I were a teen destined to be into a little kink and I saw this picture in a magazine, I’m sure it would make me feel like I was way less of a freak (I’m not saying kinky people are freaks any more than anyone else but it’s always nice to feel a little validated, no matter who you are).

My favorite thing about Violet Blue is that her attitude towards sex is:  I’m a woman, I’m a feminist, I have kinky sex, I like it.  All those things can be true at once.

Does Suit Supply empower men to be misogynists or does it empower women to embrace power play fantasies?  Maybe it depends on what you’ve been raised to read from this.  Coming from my sex positive household I see consent.  My male friends with more sheltered upbringings can’t imagine that any nice, normal girl could choose this over candles and rose petals.

It can be both.  As long as children are brought up in both types of households it will be both.  Maybe that’s the problem.

I enjoy Taylor Swift perhaps more than I should.  She just makes me want to jump on my bed in PJ’s that I don’t actually wear with my long flowing blonde curls (which I also absolutely don’t have) bouncing beautifully.  But I’m also aware of all the pro-abstinence language and symbolism in her music and more importantly in her public image.

Now this young lady is more than welcome to make her image into whatever she wants.  But we all need to be careful about demonizing other people and the choices they make with their bodies and their sexuality.  Especially because a lot of your sexuality you don’t get to decide.

Just don’t judge others for picking a different one.  As long as you stick to that rule then you’re golden.  Then we’ll all be golden. Have sisterhood.  Believe in yourself and in other women.  Assume she’s awesome until proven wrong.