I don’t like sneakers that make my feet look wide.

It hurts to have things between my toes.

It hurts to drink milk.

It hurts to smell coffee.

If you dislike a thing it’s not a promise. It doesn’t mean you’ll never like that thing. It means “I’ll try it again when I’m good and ready, but for now no thanks.”

For something to hurt means “No. Maybe one day if I’m ready, but until then, NO.”

If you dislike something, or are hurt by something, it’s your prerogative to avoid it in the future. No one should make you try to like it before you’re ready.

And if they make you try it then you can spit it out in their hands. You have my permission.

Do something you love, or that you’ve always wanted to do! Remind yourself that there are things in this world that you love and enjoy.

Have a new sexual experience.

Take ibuprofen when you get cramps.

Look at some pictures of Frida Kahlo.

Steal a really nice pen from a bank. 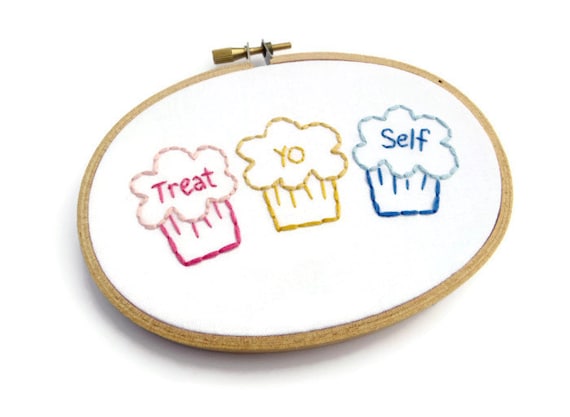 One of the guys at work called his girlfriend high maintenance the other day and this tweet was all I could think of.

So shit or get off the pot. Either you’re happy with her and you should stop complaining about the petty stuff or you’re miserable and should take care of your own business by getting out.

No need to slap a label on her, just handle your business.

I’m gonna be a bitch about this because I have something to say about it.

Sometimes I get mad at people because they did something bad. Sometimes I’m completely in the right for being mad at someone, all the facts back me up, everyone I tell is on my side.

And I’m still afraid to call them out on this thing that we can all agree I’m right about.

Because I’m afraid they’ll call me crazy or say I’m overreacting. It’s really not a big deal and I’m being a bitch about it.

Your feelings are valid and expressing them does not make you crazy or difficult or a burden or high maintenance or a drag to be around. It makes you a human. Congratulations. Be human. It’s not so bad.

Women hear it all the time from men. “You’re overreacting,” we tell them. “Don’t worry about it so much, you’re over-thinking it.” “Don’t be so sensitive.” “Don’t be crazy.” It’s a form of gaslighting — telling women that their feelings are just wrong, that they don’t have the right to feel the way that they do. Minimizing somebody else’s feelings is a way of controlling them. If they no longer trust their own feelings and instincts, they come to rely on someone else to tell them how they’re supposed to feel. [x]

I’m having a love affair with this song.

When I got to college a bunch of people assumed I was a big party girl. I’m not exactly anti-party. I like to have a good time all around. If you’re having a shindig I can make you can pretty much assume I’m coming. However these people assumed I was the kind of party girl who can’t keep up with everything else in her life the next day. And that offended me, still does.

Here’s to moderately healthy relaxation habits. Even when they look like knitting and drinking whiskey while getting a foot massage in a room full of people. Everyone’s gotta have a thing, right?

When I was in college I remember talking to a friend of mine and saying “I would never hook up with someone who was already in a relationship. Girl code.”

And he hemmed and hawed and said “If someone else wants to sabotage their relationship, it’s not your problem.”

If someone wants to use you as an excuse to do something, an outlet for a feeling they’re having, it isn’t your responsibility to police their sexuality.

But in general your relationship is not my problem.

I like giving advice because it’s like a fun puzzle to me in general, but if you’re looking for someone to be the little angel on your shoulder, you should look elsewhere.

Maturing is realizing how many things don’t require your comment.
– Rachel Wolchin [x]

I’m working a lot lately and don’t have much time to write but I’m so glad that Nicki is still proud of me.

I do what I have to do. I make my decisions for myself. I try to take other people into account but I also know that no one is gonna look out for me like I am.

And just the fact that I stick to that ideal, I don’t waver on it, means a lot to me. And when I work for 14 hours and then drink and crash into bed, I can still be proud of myself.

A few weeks ago I wrote about this guy in my life. Because I was thinking of him that day, just cause, just to be appreciative for the good things in my life.

And after the post came out I started wondering if it made sense to other people. I have a lot of guys in my life who aren’t exactly relationships but who are really important to me for one reason, one experience, one night, one statement or another.

Today I thought I’d pay homage to another and the lesson he taught me.

A few years ago, when I first got the OKCupid app I was heading to a birthday party and perusing the app to kill time. I spied the cutest thing I’ve ever seen and sent him a message immediately. Turns out he was from California and had just one more night in New York.

I invited him to meet me at the bar the party was at and once he got there and I had put in some face time with the birthday person I focused my attention on him.

He was just as cute and smart and charming as he seemed online. He had represented himself perfectly, he was just as tall and skinny and knobby-kneed as in his pictures. He was just as self-deprecating and witty as his profile. I was so hooked.

We took off to find a place to go make out for a while. The finding a place was shenanigans in and of itself but all the intimacy was lovely.

The next day he flew back to California and we rarely talk now but he pops up on my facebook feed every once in a while to remind me what a cute face he has.

Why do I cherish this memory? What did I learn that night that brings me such joy?

I learned that I can be attracted to someone and make all the first moves and have them all be seriously appreciated and reciprocated, that contrary to what some of my friends say there are guys who appreciate that. It’s okay that I’m the brave one and also happen to be the one with the vagina.

Also, my attraction to someone physically and intellectually doesn’t need to be ignored because of something so petty as time or space.

For one night I adored him and he adored me. Just because we didn’t date for a while and then burst into flames does’t mean it wasn’t important.

Length of a relationship doesn’t always correlate to quality.

No wonder I think of him so fondly.

I’ve been so exhausted this week; it’s been really rough. It’s been hard to stay awake, but worse it’s been really hard to keep a positive disposition. I’ve felt myself sliding into negativity and I don’t like it.

So here are a few things that have been helping this week.

I guess “Hot Toddy” is a generous term for what I’ve been making. Tea + The Whiskey I Found In The Cupboard is a more title accurate.

For some reason I’m incapable of being sad while listening to this song. It is just the answer to everything.

Showering the day off is always the way to go. Don’t forget to treat yourself to a nice massage afterwards, gotta get that lotion all over.

Also, even though I take it every morning, I take my pill when I do my makeup which helps me feel like it’s a treat for myself instead of a medication. Every morning I treat myself to the chance to eat pain free! Thanks, self!

Let me tell you a story that makes me really proud.

The other day I was at a restaurant. I didn’t want to go to that restaurant but someone I work with wanted to go there and I wanted to make life easy.

I got to the restaurant and it was a lot more expensive than I expected and there wasn’t any food I wanted but I figured I’d be easy and pick an appetizer or something.

On TV was Fox News telling me all sorts of bat-shit idiocy about Wendy Davis and I said (I guess louder than I had realized) “Do you think they can turn that down? Ugh, Fox News.” The waitress changed the channel (to another Fox station) and came back to the table “Gosh, it’s just a TV station. We’ve never had a problem with Fox News before” while giving me a dirty look. I must have offended her. I’ll be quieter. I don’t want to make this meal more difficult than it has to be.

And then one of my co-workers made a tiny comment that wasn’t even important but was just the last straw.

And so I left. I had one hour off that day and I was spending it in a place I didn’t want to be in for reasons that were not my own. And so I walked out. Instead of caring about everybody else I chose to care about me. And I’m so glad I did.

Espeically preventative self-care. If you can take care of your situation before it becomes a problem, do so.