So this happened apparently.

Which hurts. No matter how much it hurts though, one has to side with anyone who is brave enough to come forward about being a victim.

Whether it’s Ke$ha (even people who choose weird stage names deserve to have their bodies respected) who is facing a potentially career-ending decision and is being incredibly brave anyway.

Or Cosby’s victims who have had their reputations dragged through the mud by people who conflate the character the man plays with the actor himself.

Or friends who have their own reasons to fear retribution, slander and other untold consequences.

yall don't be needing evidence to call a woman a hoe but be needing receipts, videos, & pics when 25+ women accuse a man of rape lol

Because we think we know something about the accused. Because the allegations go against our preconceived notions of what that person is like. A friend, a star we’ve seen interviewed, someone we thought spoke our language. And how disappointing is it to be wrong, to be challenged in our belief in goodness?

And yet “James Deen held me down and f—ed me while I said no, stop, used my safeword. I can’t just nod and smile when people bring him up anymore.”

I used the safeword we agreed on and he ignored it. What more should ever need to be said?

I’ve broken up with people for more innocuous forms of treachery.

But it does break my heart. To see someone I trusted fall from grace.

I don’t believe that the pedestal was too tall. It shouldn’t be too much to ask for, a kinky, beautiful Jew who cares about pleasure and respects you at the same time.

I guess we’ll all just have to keep searching for him, and hope that some good and healing can come from this. Perhaps it’ll be the rest of the world learning how to take sexual abuse allegations seriously and swiftly.

But we need to remember,

I can regret holding Deen up as a paragon of what a sex partner should be, but I won’t regret my hope that he could have been.

Heres the kind of stuff your “Feminist” hero James Deen is into: http://www.redtube.com/312795

He makes the Steubenville football team look like Gloria Steinem. Anyone who would be “glad” her daughter was into that is human scum, and probably a child abuser. So congrats, youve turned Feminism into a sham!

I will say that I didn’t much like the “pizza delivery” scene (you know, this safe-for-work part) which felt a little Stubenville-y to me and was not anything like any fantasy of mine. However there is a reason for that. It wasn’t a fantasy of mine; it was a fantasy of hers.

If you go to the beginning of the video you see an interview with Princess Donna where she doesn’t just agree to be in the film but we find out that she personally selected the director and told him exactly what she wants the setup to be.

And here is the kicker, the thing that tells me not just how much Marty missed but how he was looking in the completely wrong place. In the interview she talks about an experience where she had been on a roof with a bunch of strange men at a party and had gotten nervous something would happen. In the real life version of events she got scared because they were strangers, some more people came up to the roof, the situation diffused itself and she ran back down to the party. Because that shit is scary.

However since then she has been fantasizing about the experience going a different way. In fact at the end of the video (if you don’t want to see any sex, and I wouldn’t blame you, skip to 1:09:00) she says that her favorite part of the experience was the beginning because it was so much like her personal experience on the roof (AKA, thank you director for giving me exactly what I ASKED for with my words).

Deen (and 7 other guys) did to her exactly what she asked them to do (with her WORDS, not her skirt) maybe even in writing (and I would bet money that there was an agreed upon safeword in play) and then she got paid for the evidence and probably a big reputation boost at work. The Stubenville football team did what they wanted to an unconscious underage girl who never asked for any of it and then used the evidence to bully and shame her.

Once again consent is what makes all the difference. And if you, Marty, couldn’t tell the difference between the entire conversation which constituted her consent and a troop of boys passing around an unconscious girl then I urge you to do women everywhere a favor and not have sex with anyone until you learn it.

In honor of yesterday, the anniversary of the post that has the most hits of any I’ve written.

I’m eclectic, what can I say.

So as it turns out it’s harder to make a weekly podcast than I had anticipated.

Please accept my apology and the following.  It’s got my face as well as my voice and a little James Deen. 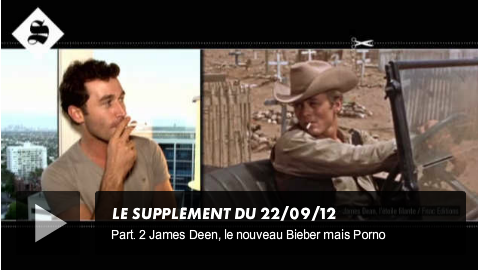 Today I watched this video

I knew Deen was coming out with a line of toys (and I have at least one friend who is excited to get one) [UPDATE: review] but when I watched the video I was reminded of something.

In the interview you see lots of posters of him in the store where the signing is being held.  And as the camera flicked past these images I kept thinking how happy he looks in all the posters.  He looks like he has nothing to hide.  Like he’s saying “Hey there world!  I’m me!  Just like this!  Warts and all!  And if you don’t like it, then you can suck it!” and the world was like, “Um, ok, then I guess you’re cool.”

It reminded me of the first time I thought about the word Gay.  I listened to a lot of show tunes and watched a lot of old movies when I was a kid so I remember knowing the definition of gay as happy long before I learned that it also meant homosexual.

And I remember that my first thought was how obvious the word was.  How obviously gay people would describe themselves as happy.  Why wouldn’t they?  They’re people who show their truest selves to the world and are happily in love.  Gay people must have the highest levels of gaiety because they are doing exactly what Deen is doing in those pictures.  They’ve come the cleanest.

The free soul is rare, but you know it when you see it — basically because you feel good, very good, when you are near or with them.

I hope one day I can find out what I need to admit to the world in order to be that happy.

Related to this, I started thinking about a concept from Doctor Who.  On the show the main character is called “The Doctor” and at a certain point he turns kind of… evil-ish and he’s told that on other planets, in other languages “Doctor” is a bad word.  It means warrior or murderer or whatever other scary thing he doesn’t want to be.

Sometimes words have meaning before they’re applied to you.  Sometimes you give words meaning when you associate with them.

The word feminist doesn’t mean “A hairy lesbian who wants to cut your balls off” it is a word which happens to encompass parts of me.  I define it with what I do and believe.  It doesn’t define me by your preconceived notions.