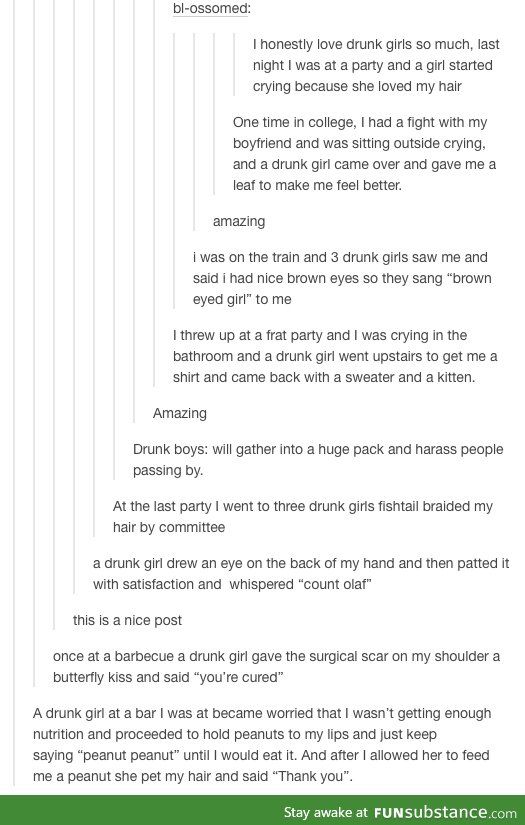 I meet these wonderful women; supportive, kind, beautiful, open hearted. And I spend the rest of the evening gushing with these women about men and work and family, falling out of shoes, our feelings about eyeliner and our butts. And we exchange texts later about how much we want to be real life friends when this night is over.

It’s wonderful and always serves as a reminder that there is a big world of kindness out there.

Friendship doesn’t have to be built on hating the same things. It can be built on just simple listening. Time spent noticing the kindness in someone’s face when they’re really listening to you. And endeavoring to give them the same gift in return.

I want more of this.

I want more relationships that are just about supporting and being supported. It feels so nice.

I love “Inside Amy Schumer”

One of the things I love about it is that I don’t find all of it funny.

But then there’s puke stuff. Because some women find puke jokes fucking hilarious. And Amy Schumer is one of those women. I suppose there’s a chance that that material is “whats gonna bring in male viewers” but that’s a lot of pressure to put on one sketch per episode.

Similarly, I love watching Grace Helbig and Mamrie Hart riff off each other because they are damn funny women. And because when they aren’t hindered by a studio, or a man breathing down their necks they spend their time trying to make the funniest person they know (each other) laugh harder than they just did.

And that passes the Bechdel test with ease.

Last night I got on the subway and there was a woman sitting down and taking up two seats. She had her shopping bags on the seat next to her so I said “excuse me” and she took the bags down. I looked across the way and there was a couple there grinning, like they had been annoyed she hadn’t taken her bags down ages ago. I sat and was happy.

A few stops later I looked up because there was another young woman leaning over us who nearly fell. She had been looking at the paper that my seat mate was writing on.

This stranger was trying to help the woman next to me work out her math homework.

I offered her my seat and when I looked back at them a few stops later this manicured blonde was giving this woman private math tutoring.

It was such a beautiful sight, this young beautiful woman explain the finer points of fractions to this older stranger.

In a world full of bad, there is still good. Come to New York and see.

Today at work a lovely woman I sometimes see was talking about her upcoming wedding plans. One of the guys remarked that when he was studying psychology in school he was advised, “before you marry, spend time with your fiance’s parents. The way you react to her mom, take note of that.”

“Oh, no!” my engaged friend remarked. “That can’t be. He’s nothing like his dad. His dad makes me nuts. And I’m nothing like my mom.”

People my age brag about this all the time. I’m nothing like my mother. Meanwhile I’m hearing my mothers voice flying out of my mouth every minute of every day. I look down at my hand grabbing something and see hers at the end of my arm.

A few years ago I asked a friend

How many times a day do you think I’m becoming my mother to yourself?

About once a week.

ONLY ONCE A WEEK?!

I’m heartened by the fact that people tell me I sound more like my grandmother (who died before I could talk) than my mother. Which means that I’m the embodiment of best qualities of the two.

It doesn’t scare me, turning into my mother.

Or shall I say, the new and improved version of my maternal lineage.

I don’t really consider myself a Misandrist within the Feminist community. Men can be useful and pretty and even occasionally think of something smart. I’ve even loved them. Heresy, I know.

But there is one image that makes me want to put on a bunch of Misandry Jewelry and run around screaming and throwing red paint on men.

Oh, it just feels so good.

On Wednesday I posted this beautiful comic.

I didn’t talk about the mom though. Check out how satisfied she is. I love images of people who are invested in bringing out self-love in others.

I have… high self-confidence. Verbally.

You: Nice to meet you.

And I catch a lot of heat for it. People think I’m stuck up, but let me ask you this, how could I be a narcissist when I don’t even know how to spell it?

But the truth is (I like to think) that the longer you spend around me doing that the more it rubs off on you. I can be proof that loving yourself doesn’t always have to be a struggle. And it can be practiced quickly and painlessly every day. This summer I’ve shown myself love by making iced tea and ice pops. And also by telling everyone around me how amazing I am.

I don’t know when it came out but I just saw the video for Bad Blood by Taylor Swift, featuring Kendrick Lamar.

And the person that she’s got bad blood with…

Yes Bechdel! Yes, not all Swift’s songs have to be about a boy!

The video does look a lot like Sucker Punch with it’s lineup of oversexed, underdressed heroine’s in bralettes and stilettos.

But let’s momentarily overlook that to notice all the butt-kicking women in it.

In my head each of the women was approached and asked what kind of hero, what kind of look and power they’d like to have.

Who knows if that actually happened of course, but a feminist can dream, can’t she?

It isn’t perfect but it was a great surprise considering I was expecting to see Swift in a field crying in a white dress with occasional flashbacks to kissing a tall white boy with great hair. And who needs that really?

Today I watched the latest episode of Inside Amy Schumer.

An Episode, any episode, they’re all brilliant.

You know what I love about that show? It’s that it feels like it’s just the contents of her brain, spilled out all over the place, the good, the bad and the ugly. In any given episode there will be some amazing, subversive feminist pieces like this.

And her humor includes the gross and scatological.

I don’t love absolutely everything but she’s a person with a broad sense of humor. And I love that she’s allowed to express all of it.

How excited am I to see her movie? Very excited.