Men are the default. 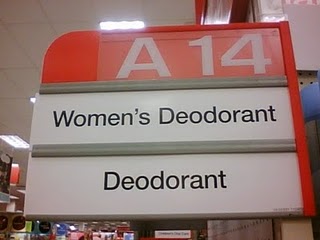 Men are normal and women are…other?  Crazy?  The people who make men crazy?  Want some more examples of this?

But if you know me then you know that I hate people who complain for no reason without any intention of fixing the problem and no desire to get to the root of it.

So lets get to the root of the problem.  Let’s at least talk about what the root could be because honestly I really don’t know what the root is.  So lets explore this together.

Who writes these signs?  Let’s go ahead and say men.  Because lets face it the majority of people with paying jobs in this country are men so that’s a pretty safe assumption. 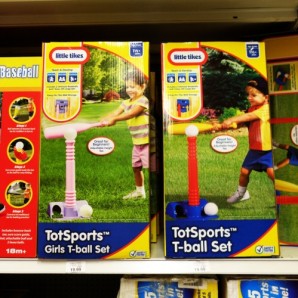 Even though I don’t so much mind Little Tikes telling me that I need to use a different product than you (well I do actually but not nearly as much) the problem is that yours is the regular and mine is edited (read: pink) for my specific needs.  Yours is normal.  Because you’re normal.  And I’m not.

My question is this: If we keep telling our sons that they are people but women are…something else, how does that shape their vision of women as they age?  Does that directly contribute to the othering of women?  Is this toy part of the reason why men yell at me from their cars?  They think that because I’m not like them I don’t have the same feelings as them?

Little Tikes has given me some pretty good memories so I’m hesitant to blame them entirely for my sad face.

But this isn’t about complaining or placing blame.  This is about fixing the problem.  And I guess all I can do about that is to say I’m not so different from a guy.  I can do homework.  I can fix a shower.  I can caulk a window.  I can move my furniture around.  I can drive and check someone out at the same time.  And I don’t need everything I own to be coated in Pepto-Bismol pink in order to do it.

Do you need everything you own to be covered in taxidermied animals for you to successfully be a man?  If you do…well that’s a whole separate problem.

View all posts by Female Gazing